Childhood cancer survival rates have increased dramatically over the last sixty years, from virtually 0 to 80%. Despite this, three children and adolescents die every week in Australia from cancer.

Our organisation exists solely to put an end to childhood cancer. Every five years we sit down together to discuss the best possible way to do this. With our Strategic Plan 2018–2022, we’re confident we’ve identified the fastest, most effective strategy for curing childhood cancer.

At its core are the principles of Discover and Translate. To Discover – to conduct world-class research that develops better, less toxic treatments for childhood cancer. And to Translate – to integrate our discoveries as quickly as possible into clinical care, including our flagship program Zero Childhood Cancer. 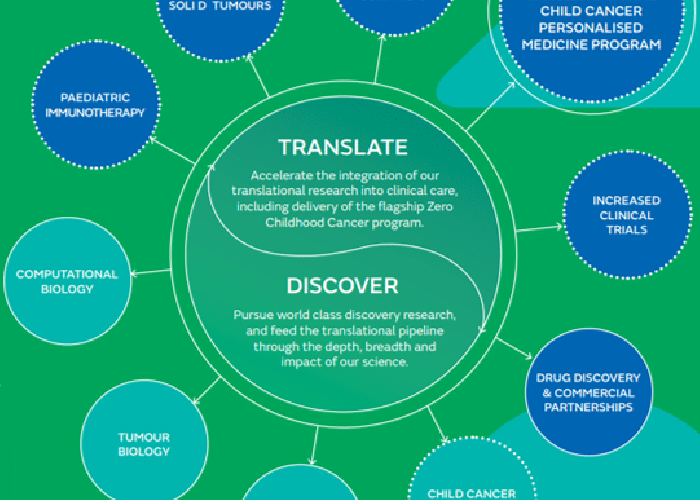 In this series we’ll be exploring some of the spokes on this wheel – the ways we’re putting these principles into action.

Zero Childhood Cancer is the most exciting childhood cancer research initiative ever undertaken in Australia. This world-class program uniquely brings together all major Australian clinical and research groups working in childhood cancer to offer Australia’s first ever personalised medicine program for children with high-risk or relapsed cancer.

Every child’s cancer is unique. The Zero Childhood Cancer program uses detailed laboratory analysis of each child’s cancer to help identify the drugs most likely to kill it. Scientists and doctors work collaboratively to identify and deliver the most effective treatment plan, specifically tailored to suit each child’s disease.

“Zero Childhood Cancer is about using the best science we have to give hope to children with high-risk cancer.”

Officially launched on 18 September last year, Zero Childhood Cancer is now 11 months old. In that time, 129 children from across Australia with high-risk and relapsed cancers have been enrolled. For most of them there were few or no treatment options. Based on the extensive analysis carried out by the Zero Childhood Cancer team, two-thirds of these children received tailored treatment strategies.

Some facts and figures:

“Zero Childhood Cancer is about using the best science we have to give hope to children with high-risk cancer. We must try a different approach. Accepting the status quo means that 70% of these children won’t survive to celebrate another birthday,” Assoc/Prof O’Brien said.

“Our early results are encouraging and as we learn more, I see future potential for targeted drug therapies to be used more broadly in all child cancers as a smarter way to achieve cure, while minimising therapy side effects.”

The impact of Zero Childhood Cancer is clear in the case of little Ellie. At just 11 months old she was diagnosed with infantile fibrosarcoma, a rare and aggressive tumour that was resistant to chemotherapy. The tumour was so large that Ellie couldn’t breathe properly and was on life support. 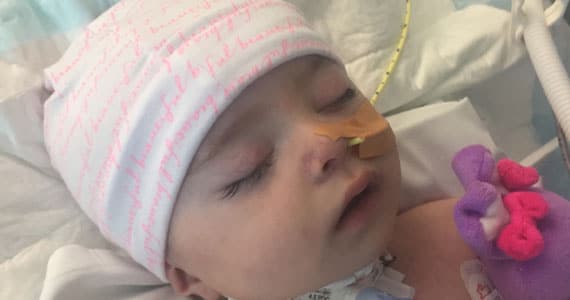 The entire genetic make-up of Ellie’s tumour was analysed through our partnership with the Lions Kids Cancer Genome Project. This identified the specific genetic change that was likely to be driving her cancer.

The team were then able to identify a new drug specifically targeting that genetic change. The drug was obtained, and after four weeks of treatment, Ellie’s cancer had shrunk enough for her to be taken off life support. Six weeks later, Ellie was out of intensive care.

Ellie’s parents, Mina and Rob, know their daughter is only here today because of the Zero Childhood Cancer program.

“We were told to think about saying goodbye, she was so sick we didn’t even know if she would reach her first birthday.

“Now, to be celebrating her second birthday, when she is such an active, boisterous and energetic two-year-old is beyond our wildest dreams.

“We can’t thank the teams at the hospitals and research centres involved in the Zero Childhood Cancer program enough,” Mina said. 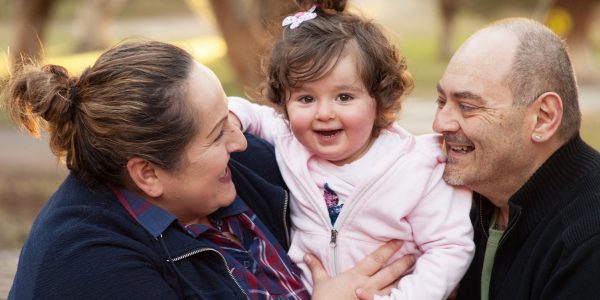 So while we watch the progress of Zero Childhood Cancer and rejoice in its success stories, we’re also working to better understand what drives cancer cells, and to find improved, targeted treatments. Find out more in next week’s post.