Well, that’s exactly what Minimal Residual Disease (MRD) testing makes possible in children with acute lymphoblastic leukaemia (ALL), the most common childhood cancer. Read on to find out how it works, and the significance of our research in this area.

Why do some kids relapse?

Almost all children with ALL initially respond very well to treatment and go into remission. But about a fifth of children later relapse, and many of these kids don’t survive.

Relapse happens when chemotherapy (drug treatment) isn’t able to get rid of all the cancer cells from a child’s body. When a small number of cancer cells survive (termed ‘minimal residual disease’, or MRD), these go on to grow and divide in the child’s body, leading to the disease coming back. And unfortunately, the cancer cells that survive are usually resistant to chemotherapy, making relapsed disease very difficult to treat.

What is MRD testing?

MRD testing is a way of finding out if any cells in a child’s body have survived treatment, and if so, how many. Once you know this, you can predict the likelihood of relapse. And if you know that a child is at high risk of relapse, you have the opportunity to try and prevent it.

Led by Professor Murray Norris, researchers at Children’s Cancer Institute worked for several years to develop a method of detecting and measuring MRD on a molecular level. The technique involves identifying unique genetic markers for each patient’s leukaemia, and then measuring these markers in a sample of that patient’s bone marrow at different stages of treatment.

Not only is the technique about 20,000 times more sensitive than detection of leukaemia by microscopy (looking at cells under a microscope), it’s also capable of predicting relapse very early on – a matter of weeks into what is normally a two-year treatment protocol.

Check out our ‘Diary of a Researcher’ video blog, where Libby from the MRD team gives you an insight into how the team conduct these tests.

What difference does it make?

To test the usefulness of our MRD-detection technique, a clinical trial ran in children diagnosed with ALL from 2002 to 2011 in five children’s hospitals around Australia and one in New Zealand. During the trial, scientists at our Institute carried out MRD testing on bone marrow samples from all participating children. Those children who the testing showed to be at high risk of relapse were given more intensive treatment (intensive chemotherapy and/or bone marrow transplantation) by their treating doctors. The results of the trial showed that this approach significantly improved survival in these children. In fact, the cure rate doubled, moving from 35% up to 70%.

As well as showing which children are at high risk of relapse, MRD testing also shows which children aren’t at risk of relapse and therefore don’t need intensive treatment. This is important because there are considerable risks of side effects, including serious long-term effects, when intensive treatment is given to a child. If treatment can be scaled down, this limits their health risks.

What’s the role of MRD today?

Today, treatment decisions for all children newly diagnosed with ALL, and those with relapsed ALL, are based on MRD testing.

Our scientists have carried out thousands of MRD tests over the years, and continue to provide what’s known as ‘advanced diagnostics’ for hospitals throughout Australia — using our MRD technology to determine future risk of relapse, as well as to monitor for the first signs of relapse in patients known to be at high risk. Every year, we do about 500 MRD tests on children and adolescents with ALL.

Over time, we’ve refined our technique and have shown that MRD testing as early as two weeks into treatment can provide a good indication of whether a child can be cured using standard chemotherapy, or will need more intensive treatment.

Check out our ‘Diary of a Researcher’ video blog, where Libby from the MRD team gives you an insight into how the team conduct these tests.

Our researchers are now looking at whether the equivalent of MRD testing could be used in children with solid tumours — cancers like neuroblastoma and sarcoma.

When cancer metastasises (spreads in the body), it releases what are called ‘circulating tumour cells’ or ‘circulating tumour DNA’ into the blood and lymph. We are busy developing a test called liquid biopsy to detect and measure these. If successful, we believe this could allow for the early prediction of relapse in children with solid tumours, much like MRD testing has done in children with leukaemia. It’s early days yet, but we’re very hopeful this will become possible in the not-too-distant future. 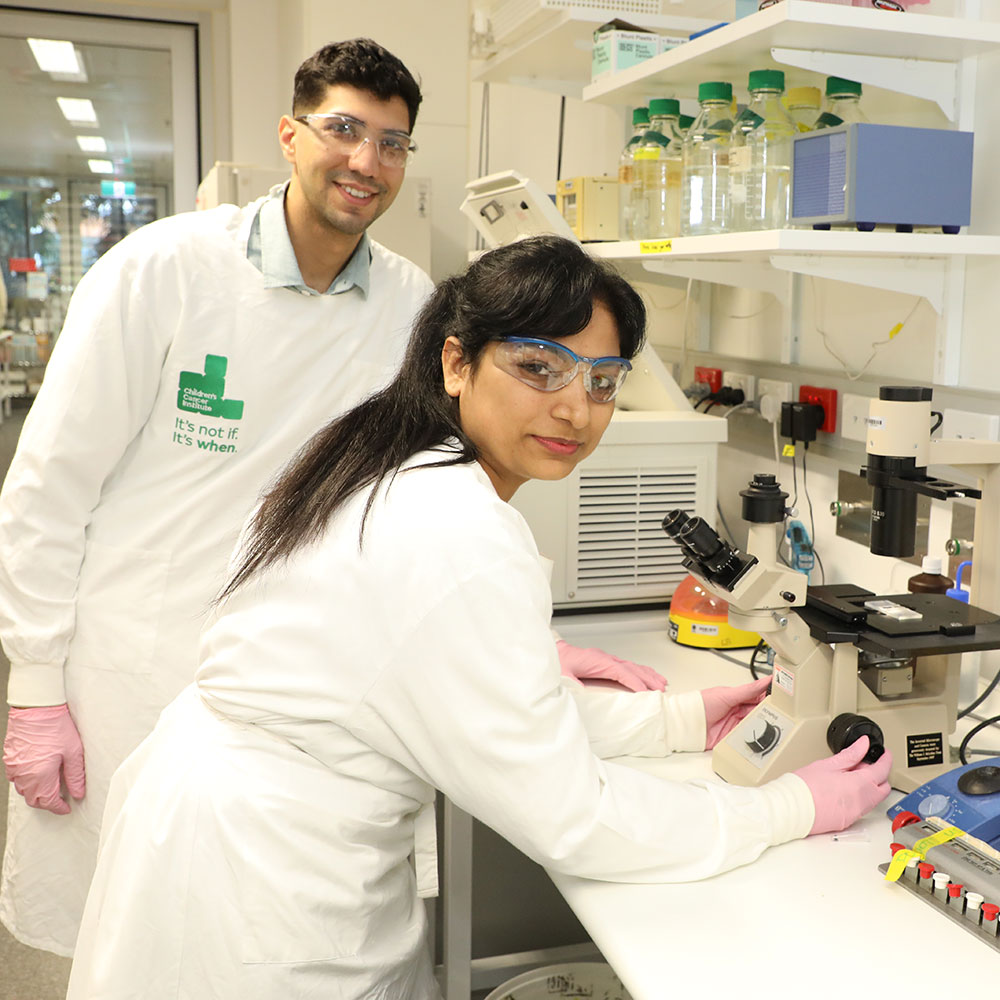