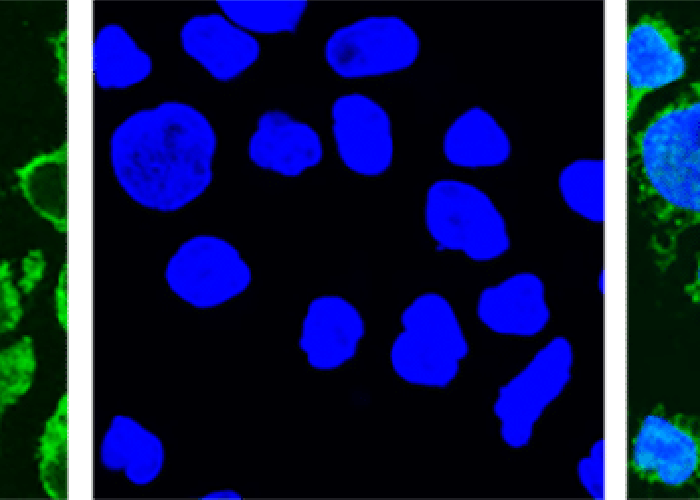 Leukaemia is a cancer of the blood cells and bone marrow. In the case of acute myeloid leukaemia, it starts with a single cell known as a ‘leukaemia stem cell’. This cell is also thought to be responsible for relapse after treatment. So what do we know about it?

Have you ever thought about all the amazing things your blood does? That red liquid travelling around your body contains three different types of cells, which carry out diverse and essential functions.

1) Red blood cells: These make up about 40–45% of blood, providing its characteristic colour. They transport oxygen from the lungs to every cell in the body, and take back carbon dioxide.

2) Platelets: These cells are responsible for making blood clot.

3) White blood cells: Although they only make up about 1% of blood, they have the greatest variety of types and functions:

One cell to make them all

All these different types of blood cells are created through a process called haematopoiesis. Amazingly, they are all derived from just one type of cell, called a ‘haematopoietic stem cell’ (HSC). This cell is multipotent, meaning it can produce many different types of cell – unlike most other cells, which can only produce exact copies of themselves.

Think of a tree with its branches. The stem cell is the trunk and the different types of blood cells are the branches. 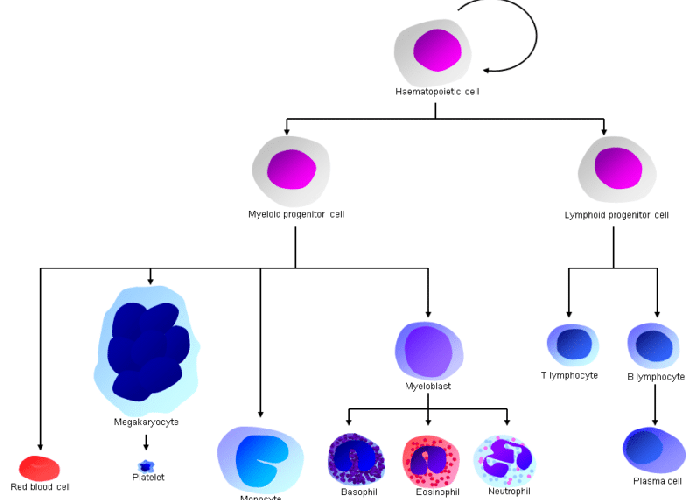 Haematopoiesis: all the different types of blood cells are created from a haematopoietic stem cell (Source: Wikimedia Commons: https://commons.wikimedia.org/wiki/File:Haematopoiesis.png)

Stem cells are considered immature or primitive, while the cells they produce are more mature or ‘differentiated’ (they have acquired distinct characteristics and functions). Critically, stem cells don’t just produce more mature cells, they also reproduce themselves, in a process called self-renewal.

So what does all this have to do with leukaemia? There’s growing evidence that the cell that starts acute myeloid leukaemia – the leukaemia stem cell – was once a haematopoietic stem cell.

About 20% of childhood leukaemia is a type called acute myeloid leukaemia (AML). It’s in this disease that the leukaemia stem cell (LSC) has been most extensively investigated and characterised.

While the survival rates for the most common form of childhood leukaemia – acute lymphoblastic leukaemia (ALL) – are 90–95%, survival rates for children with AML are only 60–70%. Scientists now think that LSCs not only initiate this leukaemia, they also contribute to its relapse (re-emergence following treatment) and to poor patient outcomes. Therefore, finding out as much as possible about these leukaemia stem cells is vital.

Leukaemia is a mixed bag.  It is characterised by an accumulation of huge numbers of cells called blasts, which are blood cells arrested at different stages of differentiation. In AML, as well as these blasts there are the rare but critical leukaemia stem cells. While the blasts only have a limited ability to proliferate (reproduce themselves), the stem cells are essentially immortal, able to produce vast numbers of blasts, while also renewing themselves.

This hierarchy of multipotent leukaemia stem cells and partially differentiated blast cells suggested to scientists that acute myeloid leukaemia (AML) might arise from a damaged haematopoietic stem cell (HSC). A now widely-accepted model of AML initiation is that an HSC acquires mutations in particular genes that set it on the path to becoming leukaemia. At this stage it’s called a pre-leukaemic stem cell (Pre-LSC). If additional mutations then occur in this pre-LSC, it turns into an LSC.

This LSC then produces all the blast cells that characterise leukaemia, while at the same time renewing itself. And because LSCs are more resistant to chemotherapy than blast cells, LSCs often survive treatment and cause leukaemia to relapse. 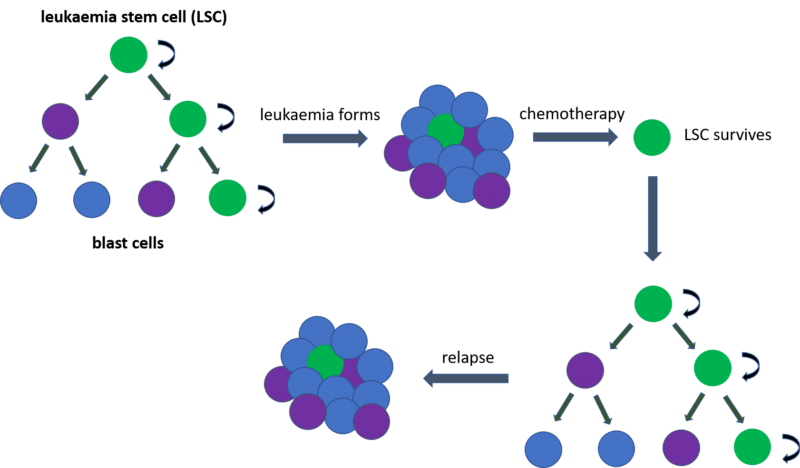 A simplified model of how a leukaemia stem cell initiates acute myeloid leukaemia and causes relapse after treatment.

Since leukaemia stem cells are thought to play such a crucial role in causing and maintaining AML, the more we can learn about them, the better.

Their research focuses on: 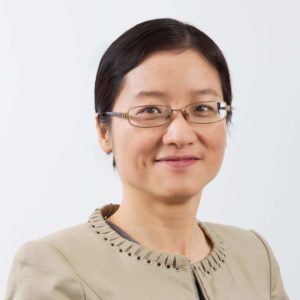 Cancer cells need a lot of energy to function and to reproduce themselves. Dr Wang’s group has identified a critical gene (called JMJD1C) that regulates energy production in AML.  Their research, published in an article in the journal Leukemia in January 2019, shows that inhibiting energy production not only reduces the number of AML blast cells, but also impairs leukaemia stem cells. This finding indicates that JMJDC1 is a novel therapeutic target for AML.

Suppressing the development of AML

Restoring the activity of this microRNA (called miR-101) reduces the incidence and delays the onset and progression of AML in a mouse model. This research has identified another potential therapeutic target for AML, and is described in an article published in the journal Haematologica in February 2019.

Find out more about the research being done by the Cancer and Stem Cell Biology Group.