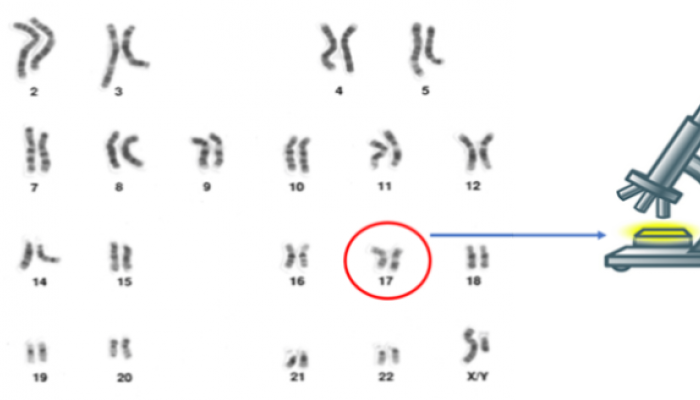 The research, published last week in the journal Nature Communications, was conducted by Associate Professor Tao Liu and his team.

New insights into the genetics of neuroblastoma

It’s long been known that certain segments of chromosomes are frequently lost or gained in neuroblastoma. The most common change observed is the gain of the bottom half of chromosome 17, a region called 17q. This gain is associated with a poor prognosis, however it’s been unclear which particular gene or genes in this region are important.

Our researchers have found that a gene located on 17q called JMJD6 is gained in about 80% of human neuroblastoma samples, and its high expression predicts poor patient outcome. They showed that JMJD6 is a genetic regulator, activating a set of genes that increase the aggressiveness of neuroblastoma. When they turned off JMJD6 using a genetic silencer, this set of genes was deactivated.

The team then looked for drugs that could switch off JMJD6. They found one drug, called THZ1, that worked quite well, then realised that if they combined it with a second drug called panobinostat, the suppression of JMJD6 was much stronger. When they tested this drug combination in their mouse model, it was highly effective, causing tumour regression and prolonged survival.

Overall, these results demonstrate that JMJD6 plays a critical role in neuroblastoma tumorigenesis and is therefore a novel therapeutic target. Furthermore, the study has identified an effective, targeted drug treatment. As panobinostat is already in clinical use, and a drug that works in the same way as THZ1 is in clinical trials, these results support the rapid translation of this targeted therapy as a novel treatment for neuroblastoma.

Top image: The 23 pairs of human chromosomes. The JMJD6 gene is located on the bottom half of chromosome 17 (Image source: National Human Genome Research Institute).